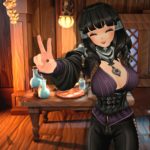 Experiment Gone Rogue is an adult VR game by Repulse. The game takes place in a dystopian future full of cyborgs, aliens, and strip clubs. The game doesn’t revolve entirely around sex but there are enough naughty features to make this game worthy of a mention. Full game is available for purchase on the Repulse Steam page.