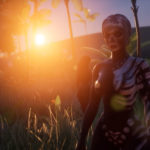 Wild Life is an adult RPG with lewd loot, sexy sidequests, and much more. The game is created by a team of indie developers who go by the name Adeptus Steve. Please support the developer by subscribing to the Wild Life Patreon page.