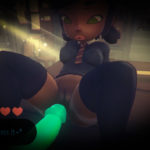 You can customize the character in a ton of different ways by changing her outfit, skin color, and more.