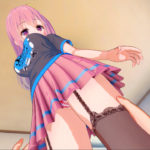 Koikatsu Party is a sexy VR character creator with a similar art style to Illusion’s other games like Honey Select and VR Kanojo. The game takes place in a Japanese school where you can customize the “student body” however you see fit.

The base game can be purchased on Steam. In order to play in VR you need to download and install the Koikatsu Party VR Patch in addition to the base game. The VR patch is free and can be downloaded on the game’s main Steam page.