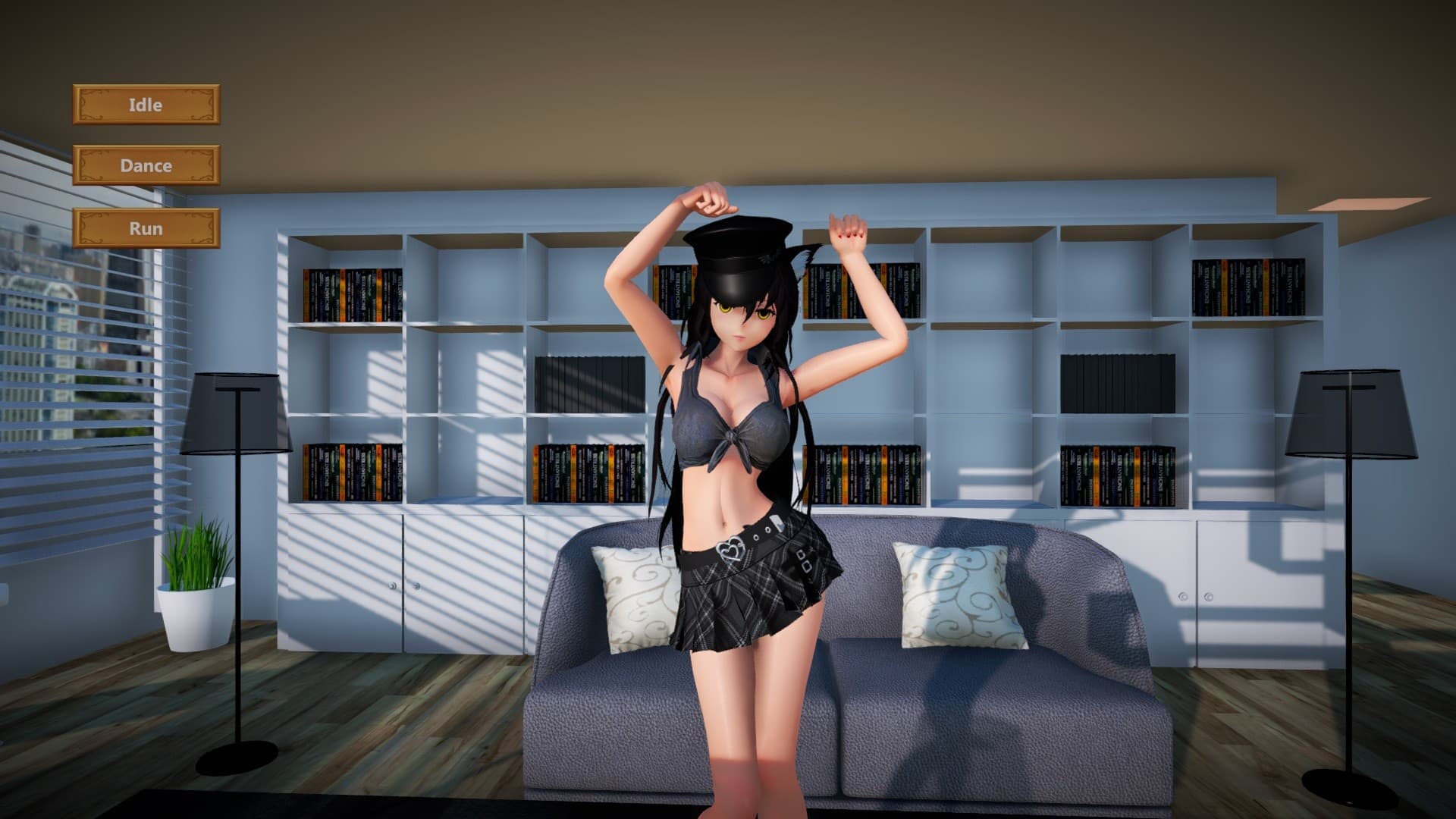 You encounter Scheris on a Saturday, who’s delighted that she has the day off from work. Although, once she’s done some dancing, running, and removing her skirt, an alarm sounds – pulling her out of what she was doing.

Reports of Devils appearing in town force Scheris to work. She voices her disappointment about losing her day off but has to take care of business, and then you’re on the streets prepared to fight.

The story here isn’t very clear and needs some development. There are a few spelling errors and grammatical issues that make the plot confusing, but these don’t inhibit the player’s enjoyment. It’s clear that the developer wanted to focus more on the gameplay of this story, and it’s where the game shines.

The gameplay shifts between slicing through enemies and experiencing the sex scenes with Scheris.

The combat is satisfying, allowing the player to complete combos, charged attacks, and even hitting enemies into the air! You feel powerful, but after a few fights, you may find this combat to be lacking.

It doesn’t seem like you get any upgrades to your abilities or moves. And with only 4 types of enemies at the moment: werewolves, lizard-men, trolls, and dragons, the lack of combat options become apparent.

When you’re not killing monsters, the sex scenes with Scheris are just as exciting and provide more variety. In the scenes where she’s alone, you’ll be able to choose how you’d like her position, and in the VR demo, you’ll be choosing from an array of poses. When she’s with another character, you’ll only be able to move the mouse around to view different angles.

So while the gameplay can be buggy, the smooth combat outweighs the lack of variety encountered. The combo meter helps every hit feel like it has an impact, and you can never tire of hacking through enemies in the air.

Similarly, the sex scenes have a good amount of variety, from solo to group – they’re all enjoyable in their own ways. They even cater to a wide range of fetishes, so there’s something for everyone here.

However, during the fighting parts of the game, the enemies look out of place. Their animations feel jagged and repeat themselves, a shocking experience when you’re comparing them to Scheris’ fluid movement.
It feels as if the two came from separate games, and their interactions can feel disorienting.

But in the sex scenes with Scheris, her model is on full display. Her model’s shading is great and compliments her body. What’s even better are her poses, which feel natural and realistic. During these scenes, you have a big variety, and they all feel nice to look at.

Sweet Devil Hunter incorporates a few fantastic qualities; it’s high-quality VR scenes, fun gameplay or high res models. Although it still has room to grow in its story. And while it’s not something crucial, having more in the way of options with character design, would allow those graphics to shine.

But if you’re looking for a fun experience, put your VR on and experience Scheris up close and personal. And if you don’t own a VR, don’t fret – as you can still experience these scenes on your computer!

In this adult VR game demo, the focus is on Scheris, allowing the player to join her in different scenarios ranging from her dancing to full-blown sex scenes, all in Virtual Reality.

These scenes vary in terms of customizing, some you have almost ten different ways you can make her pose, but in some you’re limited to only one option. For example, when Scheris is on the toilet, you have the choice to have her pee.

Scheris’ appearance has some customization options, but they’re lacking. Your options include customizing Scheris’ hair, clothing, weight, and height. The clothes cycle through 5 options, from scantily clad to full nude. The player can only change her hair to pink, and her weight change isn’t noticeable, just a slight widening of her hips.

With more character customization options and allowing the player to be more engaged with Scheris, this demo could become an amazing full-fledged experience, as the sex scenes are the only option in the VR demo.