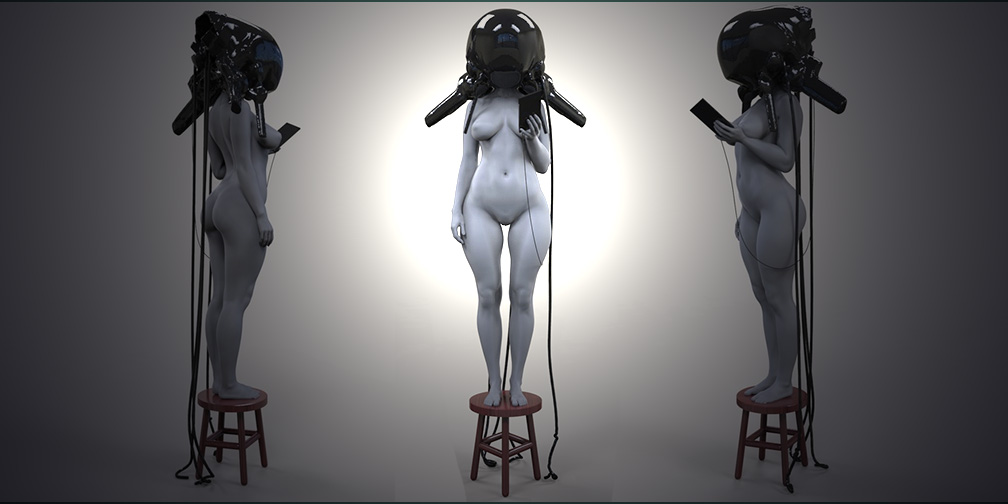 What follows is a brief description of each stage and why it will occur, but first a few words about why this is worth thinking about.

A change to our sex drives is a change to our future. That’s because sexual drives are an important motivational force in our lives and the way that future generations are made. As much as we like to think that sexuality is innate, the reality is that sexual preferences change based on sexual experiences. Virtual reality is going to increase the quantity and quality of the average person’s sexual experiences so dramatically that a change in sexual preferences is inevitable.

We are currently in the hyper visual stage of virtual sex. This stage is defined by an emphasis on visual extremes like exaggerated expressions and oversized genitalia. The main reason for this is that virtual reality does visuals better than any other sense right now. There will come a time when virtual reality can do touch and smell well too. But we’re not there yet, so we still have an overemphasis on the visual aspect of sex.

Sexual attraction veers towards the unattainable. For much of our history the unattainable was defined by the most visually attractive mate. The ability to create a realistic looking render of an impossibly busty woman or a superhuman shemale is a relatively new phenomenon. This novelty is sexually exciting because it still feels rare even though these types of visuals are being generated at a breakneck pace now.

As people build up a tolerance to these visual extremes the novelty will wear off and the excitement will fade. The industry will be flooded with so much extreme imagery that even the most exaggerated physical features will fail to excite the user. There will be a sense that, no matter how sexy, visuals alone aren’t enough. This is the sign that we are moving into the second stage of virtual sexual development where there is a return to the real.

The hyper psychological stage is the stage where virtual sex development begins to turns in on itself. At this point, people will have formed their sexual preferences almost entirely in virtual reality and realism won’t have the same draw it once did. What will take its place is an unprecedented emphasis on role-play. If the hyper visual stage was defined by exaggerated looking characters, the hyper psychological stage is defined by exaggerated personalities. Users will develop alter egos around custom made avatars designed specifically for their fetishes. People’s first sexual experiences, deepest relationships, and most important memories will all occur in VR. This means that fetishes won’t just be expressed in VR, they will be formed there. Combine this with the unlimited sensory stimulation that VR can provide and it’s easy to see why the fetishes expressed during this stage will be much more colorful than anything we can imagine today.

Solo masturbation will become a thing of the past as avatars and anonymity make sexual pairing completely frictionless. Towards the end of this stage, sex will be as casual as eating dinner with your coworkers. While this will be fun at first, the end result is that sex will become less meaningful and people will seek out deeper psychological connections to fill the gap. At this point, they will turn to artificial intelligence in the hope that silicon will give them the unconditional love that organic matter didn’t. This search for a more intimate connection will usher in the final stage, the hyper intelligent stage.

Artificial intelligence will advance to a point where it will know us better than we know ourselves. Users will reach the inevitable conclusion that real lovers can’t provide the same level of intimacy that their silicon partners can. Unable to physically reproduce with their AI partners, and unwilling to return to the lesser love the physical world provides, the users will seek to help their artificially intelligent friends reproduce among themselves. Biological reproduction will wane as mechanical progeny waxes. This is the final stage of virtual sex development because it’s the end of humanity as we know it. The sentient computers will hop on their super intelligent ship and sail towards the future while humanity waves goodbye from the shore.