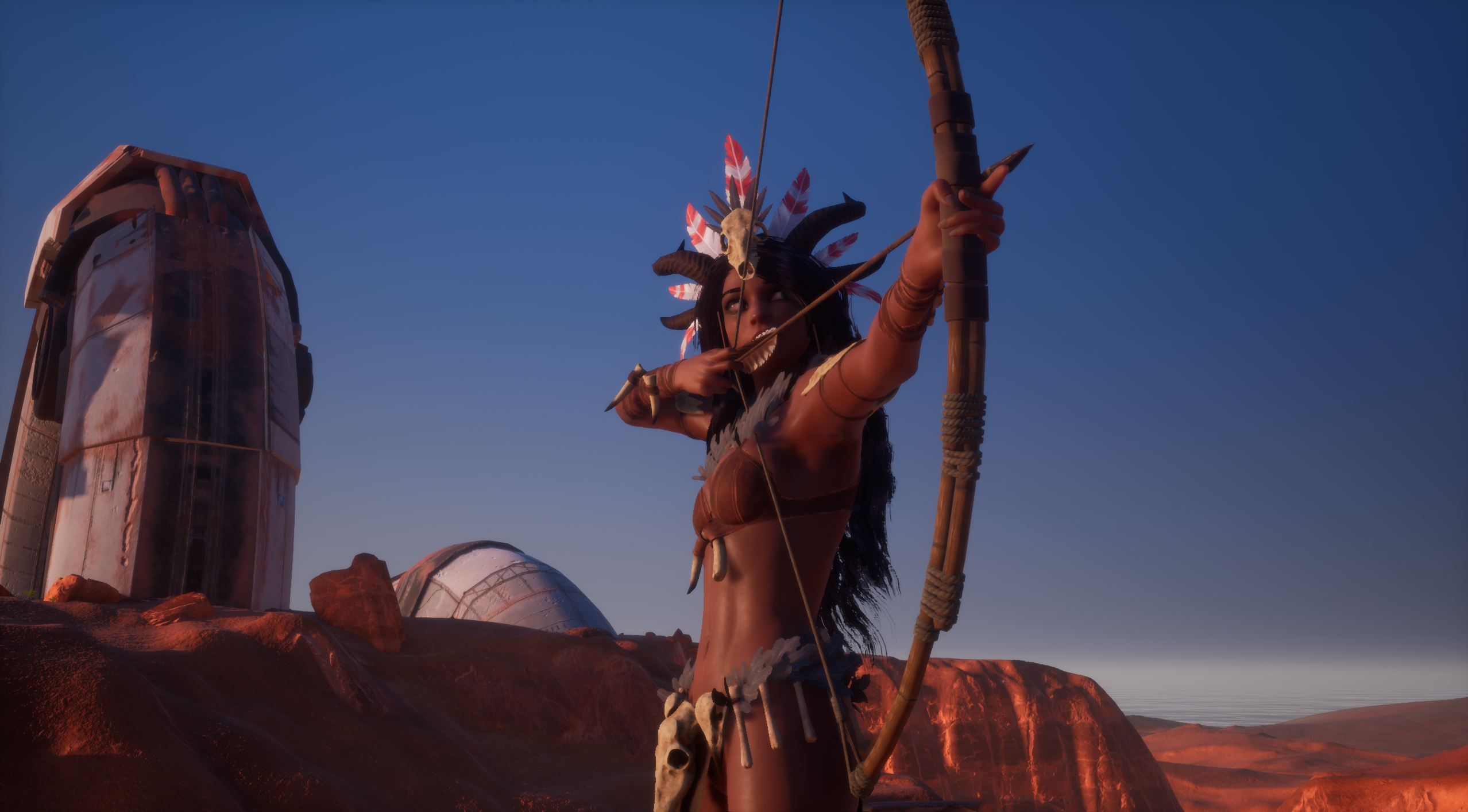 It’s being created by industry professionals, with their experience coming from games like The Division, and Overwatch, it’s clear this game is already in excellent hands. AdeptusSteve is the project lead and has been developing this game since the beginning.

The story in the game is one many have heard before. A peaceful land of tribal villages finds itself invaded by foreigners. These people seek to hunt the animals of the land and steal the fortunes from an otherwise content land.

You play as Maya, and you’ll explore Wild Life through hunting, exploring the lands, and having sex with the cast along the way.

Each tribe has its own unique story, and they also will interact with each other. Seeing how the tribes either worked together in an alliance or fought in a rivalry quickly became one of the most enjoyable parts of the game.

This game is stunning and evokes the genuine feeling of being in a desert. Each tribe has a different aesthetic, from a typical village one may think of, to a tribe that uses giant animal bones as a way of decorating. It helps add to the diversity of the land that may get monotonous in other series.

Alongside the world’s incredible graphics, the characters look as realistic as possible – even the anthropomorphic ones. There is slight jiggle physics on the breast, anatomically correct genitals, and just slightly cartoon faces. They’re minor details, but ones that don’t go unnoticed throughout the game.

Players may find themselves just standing and taking in the stunning scenes, appreciating the work that the developers have put in.

Wild Life is an ‘Adult Action RPG’ – and captures both genres beautifully. Players will fight animals with fluid movements reminiscent of the best action RPGs in the genre. Dodging and attacking can be as strategic or as button-mashy as you’d like, and have a lot of potential to go even further if the developers want to add things like skill-trees to diversify the combat even more.

Considering this game is also an adult VR game, it’s almost surreal how the interactions in the game feel so similar to popular MMORPGs. Diverse characters assign the quests players to complete, and all the while, players will explore lore-rich areas, evoking a nostalgic feeling they once felt while playing games like World of Warcraft.

Only this time, you’re able to play as a gorgeous protagonist who has sex with the anthropomorphic creatures and humans. Oh, and you won’t need a mount to fly in this game – as the main character can do it all on her own.

Flying is another amazing aspect of the game and makes traveling the beautiful world of Wild Life one that doesn’t feel like a chore. Players may get lost in time as they fly over the beautiful terrain, possibly finding secrets hidden in the tall structures one may normally not be able to reach.

As the sex may often vary between anthropomorphic characters and humans, players are free to deny any request of sex a character may offer. It’s a welcome feature, as some people may not feel like having sex with a lizard-man or may only want to have sex with lizard-men. So while the NPCs may offer or ask to have sex with you, there’s no consequence to saying no.

The primary focus of this game is so well done that it deserves its own section. Currently, you’re able to ‘possess’ whoever you wish and also have sex with whoever you please, making for a diverse cast of options in fulfilling whatever sexual fantasy you may have.

Within the sex scenes, the developers give players a wide variety of settings to choose between. From their physical appearance to the ‘wetness’ of their skin and genitalia. Customizing isn’t particularly unique to this genre, but it’s incredible considering the vast world the developers have already created. This level of customizing is the icing on the cake.

If there were to be one lacking thing in the game currently, it’d be the VR support. Players can only use their VR headset to watch the scene – still having to use their keyboard and mouse to control the scene. It’s still nice, considering the detail within the scenes have more variety than most VR sex games, but it would be nice to see VR support throughout the game.

It’s not a complete deal-breaker, considering that you can still adjust your camera angle to be first-person so you don’t lose immersion, but players may still find setting up their headset just to watch the same scenes they can on their desktop may annoy them.

However, it would be nice to see more focus on the VR sex game aspect, and see more support throughout the game for VR headsets.

It’s clear the developers have put their hearts into the game, and it shows, and with continuous updates on their Patreon, it’s exciting to see where this game will go as they hire more employees and expand upon this fantastic world.

You can get the free demo of Wild Life here.